In 1929 a Committee was formed by the Post Office to discuss a scheme, available only to banks, for registering packets containing items of high value, and procedures for dealing with these at Mount Pleasant Sorting Office. In a search for ideas, an approach was made to the German Postal Administration for details of their registration of packets scheme and enquiries were also made with the Swedish and Danish Administrations.

At a meeting in the Secretary’s Office on 14 February 1930 it was proposed that parcels of banknotes, cheques and other securities sent through the post should be classed as ‘High Value Packets’. They would be registered, but in addition would bear a special red label inscribed ‘HVP’ and would be entered on special lists in transit. Furthermore, ‘HVP’ packets would be enclosed in special green mailbags to ensure they were not overlooked. No additional charge would be made for this service but special conditions were laid down as to how and where such packets were to be handled, and would follow a strict timetable. Among the points discussed was whether the mail vans used on this service should be accompanied by retired Police Officers as guards and, if so, whether they should be armed, although neither eventually happened.

Following these discussions the High Value Packet service came into operation, being announced in the Post Office Circular of 11 June 1930 to begin on 16 June. Packets were to contain bank notes of a value of £500 or over and would be sent by letter post only, prepaid at the letter rate, with a registration fee of 3d, which would cover compensation up to £5. Packets were not delivered to the banks but collected from specified Post Offices by authorised bank staff, and individually signed for.

Although it was originally intended to cover the entire Country, the Scottish banks, after expressing initial interest, decided that the existing Registered and/or Express systems, coupled with their own insurance cover, would be adequate for their needs and cause less work for them; as a result the service only covered England and Wales.

A service from London to Belfast was included in the scheme but did not extend further into Northern Ireland, where the normal Registered/Express service was used. This was a one-way service, as it did not operate from Belfast to England. In addition there was a service of some sort between Belfast and Dublin for the exchange of banknotes. Both these services ended around 1972.

On 28 March 1949 the ‘HVP’ service was extended to Scotland but only between London and Edinburgh, Glasgow, Dundee or Aberdeen and was used mainly for the exchange of banknotes. Scottish banks still issue their own notes. A limited ‘HVP’ service began within Scotland early in 1961 and became fully operational throughout Scotland on 1 March 1961. Normally ‘HVP’ labels were used but ‘HVP’ handstamps have been seen in black and purple, plus handwritten in red.

Although originally no charge was made for the service, from 10 January 1966 a charge was introduced of 2/- per lb or part thereof, plus Registration and weight. This was increased to 4/6d per lb from 1 January 1969, amended to 22½p following decimalisation in 1971.

By the 1960s some larger Bank offices were using franking machines and meter frankings can be found used on HVP mail instead of stamps.

Urgent packets could also be sent Registered/Express when postage would be calculated on Registration plus Express plus postage on weight. ‘HVP’ labels were not used, as this was a separate service with its own rules and regulations.

The ‘HVP’ service was officially abolished in England and Wales on 31 October 1973, when the service was taken over by Security Companies, which continues to this day, but carried on in Scotland for about two years, during which time a new scheme, known as the ‘BANKERS SPECIAL PACKET’ service (‘BSP’) was set up. The ‘BSP’ service began operations on 18 August 1975. No special labels were used for this scheme but handstamped ‘BSP’, in three sizes, has been seen in black, purple and reddish purple, plus ‘BSP’, framed, in purple, often, but not always, used as the only cancel on the stamps. These emanated from different regions in Scotland, so as yet no logical explanation for this use. The ‘BSP’ service ended when Registration was replaced by Special Delivery services on 12 October 1998.

The Bankers Special Packet scheme charged a flat rate for packets up to 35lb; the various, ever increasing, rates being as follows:

Some material for both services is available but not easy to find. High Value Packet items generally are labels or tags with ‘HVP labels, bearing higher value stamps and showing a bank address, with a Registration label.

With the ‘BSP’ service, much higher postal rates meant that stamps were either overlapped on one side of a label or two or more separate labels were used. Many are badly creased, having been used as hand-holds when moving the packets, and roughly removed using something like a Stanley knife. These tended to be separated on removal at the receiving bank and many examples are single labels, telling only part of the story.

Another means of sending valuable items by post was by the use of ‘business pouches’. These were lockable (originally leather) pouches with slots into which labels could be inserted, one to show the address and another for postage. The postage labels were often turned and reused. If these pouches were to be returned to one central source, there would be either a return address fixed to the pouch (which would be covered up by an outward address label), or the outward address label could have a printed return address on the back.

It is possible such pouches may have been included in the ‘HVP’ service as a number of stamped labels bearing bank handstamps used in the 1960s, showing meter labels on dispatch and stamps on the reverse for return, have been seen bearing postage rates which equate to HVP rates. It is not known when the use of pouches ceased. Possibly these may have contained documents rather than notes.

Between 1915 and 1918 trials were carried out to prevent, what the Post Office called, ‘the prevention of surreptitious removal’ of high value stamps from telegraph forms, for sale on the philatelic market. At one London office stamps were clipped, after being folded in half, with a ‘T’ shaped punch before being affixed to telegraph forms while at another office the stamps were clipped after being affixed. This resulted in the decision to clip stamps after affixing and special clippers were issued to offices with high telegraphic turnover throughout the country, and this continued until at least the mid-1960s.

A similar trial may have been carried out between late 1983 and early 1985 to stop high value stamps used on Bankers Packets reaching the philatelic market at two Post Offices, both under Inverness Head Office, Beauly and Tain. At Beauly all high value (£1 and over) stamps seen used in this period were mutilated after being affixed to the parcel labels. Oddly, no £1 or £2 stamps have been found used during this period but it is assumed these also would have been mutilated, if used. At Tain stamps were mutilated by tearing a small hole in them before they were affixed and in a number of cases the stamps themselves were also cancelled before being affixed. However at Tain this does not seem to have been a continuous trial, as both punched and unpunched examples are known in the period, even on consecutive days, with no logical explanation available. Unfortunately material from Tain available for study is very limited. More information is needed before any conclusion can be reached.

Because of the cash value in packets being transmitted, these attracted the attention of criminals and a number of raids on vans were carried out. The biggest, and best known, is the Great Train Robbery of 8 August 1963 where about 120 bags containing around 2l00 kg of cash, mostly in used £1 and £5 notes, being carried on the night mail train from Glasgow to London, stopped by a fake red signal at Sears Crossing Nr Ledburn in Buckinghamshire, were stolen.

The story behind the ‘HVP’ service has now been made available at the National Postal Museum & Archive in London but there is no information whatsoever on the ‘BSP’ service. The whole Bankers Special Packet service is very much an on-going study and up-dates will be posted as and when addition information comes to light. 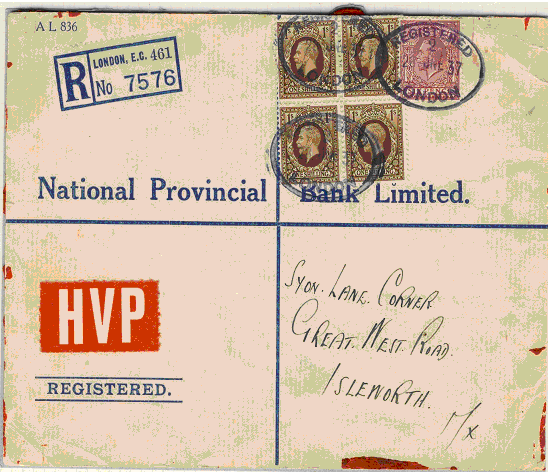 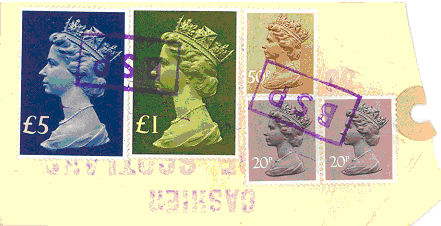 The reason for the use of ‘BSP’ handstamps is not fully understood, possibly intended for use on mail bags?

* There is new information on surreptitious removal in my article here.