For many years I have been aware of, and puzzled by, a series of imperforate George V Royal Cypher 1/2d stamps, each of which bears a manuscript reference number on the reverse. These were usually described as 'Fastness trials' although I suspected this was not strictly correct. I have been unable to find reference to these in any of the books I have and they are not listed in any of the catalogues. None of the stamps seen have been overprinted Cancelled or Specimen, which is normal for trial examples.

Curiosity having got the better of me, I have recently been trying to find out more, making a visit to Post Office Archives (Heritage Services). I started off looking at a file dealing with the 1916 British Dye trials (Post 30/3797A) which are listed by Gibbons and in a few pages at the end I found something which may provide the answer.

As mentioned, a number of these stamps have been seen over the years and I have a record of the endorsements found on the back of the sixteen examples known to me, which are:

The item previously listed as 2188 No 8 has now been seen and the previous attribution found to be incorrect. It is now correctly listed at No 2.

I have included the 'S' series in this list because the endorsements are in an identical hand and ink. However these two are without gum and very fine impressions, whereas the others have at least some gum and are not of such fine appearance giving the impression of having been 'tested'.

Presumably the missing numbers existed and if anyone can fill in any of the gaps, I would very much appreciate details. In a conversation with Douglas Muir he said that he had no knowledge of these trials but that the numbers were undoubtedly 'official'.

The possible explanation begins with a letter from the Board of Trade to the Post Office dated 11 January 1923 stating that an application had been made to the Dyestuffs Advisory Licensing Committee for the import of a quantity of German dyestuff for the printing of postage stamps. Prior to the War most dyestuffs had been imported from Germany; after the outbreak of hostilities this was no longer allowed and even at this late stage there was still restrictions in 'trading with the enemy'. The dyestuff in question was 'Transparent Hansa Yellow G'. This was used by Harrison's colour makers J W & T A Smith Ltd to produce ink for the 1/2d and 2d stamps, although no names were mentioned in the Board of Trade letter. The Board were reluctant to licence imports if an equivalent home-produced material was available and suggested that, although not an exact match, a very efficient substitute was manufactured by John W Leitch & Co Ltd of Huddersfield.

Harrison's however experimented with dyes produced by British Dyes Ltd, (whose works were also at Huddersfield) who had produced the dyes for the 1916 experiments. By March British Dyes were able to produce a pigment which gave promise of proving satisfactory. Soon after, Harrison's produced a sheet of 1/2d stamps from this dye, which, although the colour was not quite so full as that of the standard, was a very close match, and it was arranged for some of the stamps from this sheet to be tested for sensitiveness to the removal of cancellation ink and other qualities. These tests were duly carried out and on 2 July the Government Laboratory pronounced these satisfactory.

Although not conclusive proof it does seem possible that the stamps listed above came from this sheet. Although none of the stamps seen show any trace of a cancellation, they may have been used for the 'other qualities', or possibly the 'Standards' (the 'S' series?) against which the tested stamps could be matched.

My thanks to Douglas Muir and Heritage Services and also to my fellow-collectors who gave me details of the stamps in their collections - they know who they are! 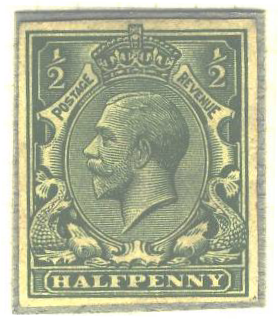 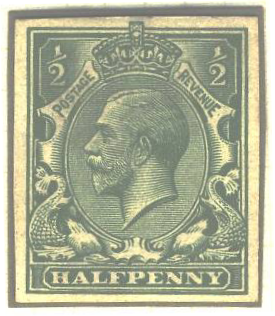 Endorsed on reverse 'S No 5'