Prior to the outbreak of the first World War, at least 90% of dyestuffs were obtained from abroad, mainly from Germany. After the outbreak of hostilities this source was no longer available and problems of supply soon arose.

Harrison's purchased from well-known firms of ink-makers the inks they required for stamps of the value of 1-1/2d and upwards, but made their own inks for the 1/2d and 1d values. Red was also used for the production of 2/- booklet covers.

Regular supplies of both colours was essential, other colours were not a problem as they were used in comparatively small quantities.

Section 4 of the Schedule to Contract with Harrison's read:

It is essential that the ink of the stamps be quick drying, free from lead, not soluble in water, and of such character as to be absolutely secure against the successful removal, without material alteration of the colour of the Stamps, of cancelling ink of the kind used by the Post Office for the cancellation of the Stamps

which left little scope for change.

In order to partially try to overcome the difficulty in obtaining dyes previously obtained from Germany, in 1915 the Government set up British Dyes Ltd, who took over the business of Read Holliday and Sons, which had been set up in the early 1830s. British Dyes had offices in Kingsway, London and a factory in Huddersfield, to produce various pigments, although their main purpose was the production of TNT.

Up to the beginning of 1916 Harrison's ink-makers, J W & T A Smith had been able to provide sufficient dyes for stamp production to continue but were now indicating that it was unlikely they would be able to do so in the future. Harrison's approached another colour-merchant (Mander Bros) but they were unable to assist. The supply of dyes from America was also investigated, but it turned out these contained more than the permitted amount of 'enemy material' (no dyes containing more than 25% of enemy produced material could be imported without a special licence). It subsequently transpired that Smith's had been importing material from Switzerland all along having informed the British Consul at Zurich that it contained less than 25% of material of enemy origin, but that the Consul was now less easily satisfied! As a result Smith's asked for a licence to import this material. The Board of Trade were most reluctant to grant such licences and contacted British Dyes to ask if they could help. Following this request, on 30 June 1916 British Dyes wrote to Somerset House stating that they had made a number of tests and had produced two colours which they believed would suit the purpose. On 7 July British Dyes sent samples of these colours to the Post Office, who sent them to Harrison's on 12 July suggesting that they investigate further, which Harrison's did.

During the following weeks trial printings were made using both colours but the results were not particularly satisfactory. A note dated 18 September stated that the appearance of the halfpenny essay seemed to show that the green ink was unsuitable in thickness as well as in colour. Regarding the penny essay, these were appreciably different in colour from standard, but seemed on the whole more satisfactory than the halfpenny.

Post Office stores then sent specimens from standard inks to British Dyes Ltd for comparison, and some further particulars of Harrison's requirements, so that further experiments could be carried out.

In October British Dyes Ltd advised Harrison's that they could supply 'one or two hundredweights of Tartrazine (a yellow dye used in the production of 1/2d stamps) per month' and 'with regard to the special red hope to supply at the rate of about two hundredweights per month at the end of three months'.

Harrison continued to be able to source material for the production of halfpenny stamps without the need to use British Dye colours but material for red colour was a particular problem and Harrison had to mix various weaker colours to continue production. One result of the use of weaker colours were the pink stamps (SG N16(10), which the Post Office found out about when one of their staff purchased a book of stamps containing examples of these stamps, for private use.

Because of the continued delay in obtaining suitable red British dyes, Harrison still wished to obtain a small amount of 'enemy produced' material, under licence, from Switzerland to tide them over until British Dyes were in a position to supply, but the Board of Trade suggested that the Post Office should adopt the 'Para red' already produced by British Dyes or an alternative weak colour which Harrison themselves had produced. The Post Office, however, were unhappy because they felt the 'Para red' was too near in colour to the 2d stamps, but were prepared to consider the weak colour. Harrison's on the other hand indicated that the weak colour would not work satisfactorily on the printing machines as it clogged the plates, would not dry on the paper, caused excessive waste in perforation and output was materially decreased. A suggestion was made that if there was the danger of confusion with the 2d perhaps the issue of 2d stamps could be suspended until the matter had been resolved.

The Board of Trade even went so far as to suggest that issue of the 1d stamp might be suspended for three months, its place being taken by the issue of two halfpenny stamps for which green ink was procurable. The Post Office had to tell them that this suggestion was totally impracticable as, apart from the added cost, the papermaker could not produce the paper required for an extra 60 million stamps per week, nor could the printers turn out the increased quantity.

By mid-October the Post Office had reluctantly come to the conclusion that unless they could obtain the small quantity of enemy origin colour needed they would have to consider using the 'Para red', whatever its shortcomings. As a result, on 24th October, the specimen Para red stamps were shown to the Postmaster General to whom it was pointed out that the difference in colour was not striking by daylight and negligible by artificial light and that it was almost impossible to make out a case on the grounds that the risk of confusion with stamps of other denomination was increased, which were grounds on which the Board of Trade might be induced to issue a licence to import enemy material. It was therefore suggested that the 'Para red' be accepted temporarily until British Dyes could produce the original shades, to which he agreed.

On the same day the Controller of the Stores Dept was asked to inform Harrison that the 'Para red' was acceptable and requesting that a sheet in the new colour be submitted for registration, together with specimens for official collections and the King's collection.

This then is the background to the Para Red colour trial and the associated 1/2d in grey-green. These 1916 colour trials are listed in the SG Specialised catalogue and are known in blocks with official inscriptions on the selvedge, as follows:

The overprint for the trials in Grey-green, Brown Red and Dull Scarlet shows a peculiar flat top to the first C of CANCELLED, which has not been noticed elsewhere.

In the end all this proved unnecessary as Harrison's were eventually able to obtain sufficient suitable colours from material seized and sold as 'prize' mixed with the weak colours mentioned earlier and Para red until, by July 1917, British Dyes were able to produce colours which the Post Office considered 'not unsatisfactory'.

In 1939 Hugh Vallancey secured what he claimed to be the total residue of the stamps from the original proof sheets for the 1/2d Grey-green and 1d Para Red printings. These amounted to 48 stamps in Grey-green and 57 in Para Red, but it is suspected these may not be the totals now available although they are scarce. Stamps from the other printings are fairly easily obtained.

There is a file in Post Office archives on this subject (Post 30/3797A) which was consulted, although this was mainly in connection with a possible later ink trial.

In The Postage Stamps of Great Britain Vol 4 (pages 45 and 63) Beaumont & Stanton state that these dyes were manufactured by the Imperial Chemical Dyestuffs Group. This is incorrect. As stated above British Dyes Ltd was formed in 1915. In 1919 a merger was effected between British Dyes and the largest independent dye manufacturers, Levinstein Ltd., to form British Dyestuffs Corporation. In December 1926 Brunner, Mond & Co Ltd., Nobel Industries Ltd., British Dyestuffs Corporation Ltd. and United Alkali Co Ltd. merged to form ICI, so the ICI connection was some years in the future.

However this was not the end of the 'Wartime ink trials'. An imperforate proof sheet printed in scarlet using Manders inks, with Control H 16 is in the Inland Revenue Archive and in 1918 Harrison's made experimental printings on uncoated paper in three shades of scarlet from inks also manufactured by Manders Bros, one of which was with control M 18. Little information is available on these trials, but research is continuing.

The red used for 2/- booklet covers was known as 'Persian Red'. On 12 July 1916 Harrison's wrote to the Post Office stating that they had only sufficient red colour in stock for two million stamp book covers after the 45th issue then in progress. As they had been unable to procure any further red colours, alternative colours were submitted in two shades each of brown and orange for consideration, together with an example in the colour then being used. Each colour was represented by blocks of ten (a) of front covers for 2/- booklet No 45 and (b) the back cover for the same booklet, which was an advertisement for 'Blackbird fountpens'. Of the two alternatives, the preferred colour was orange.

However only six days later on 18 July, Harrison advised that they had managed to find a further supply of 'Persian Red' colour which would be sufficient for their requirements for the foreseeable future.

PARA RED, as it was always referred to in correspondence (never Paranitraniline), was originally discovered 'on the fibre' by Holliday and Sons in 1880 and 'in substance' by Mendola in 1883. By an odd coincidence, when British Dyes was formed it took over the business of Holliday, which had started around 1830 in Huddersfield as distillers of ammonia and manufacturers of coal tar pitch, both used by the textiles industry.

Reference has also made to the inks Monolite Fast Scarlet, Monolite Red and Monolite Fast Red in connection with these trials. It is not known by whom, or when, this attribution was made. All these appear to be generic terms, within each of which are a number of colours and the first mention of these, in print, does not occur until 1919, three years after the trials had taken place. More information is needed before these colours can be accepted.

My thanks to those collectors who sent me details of the multiple pieces in their collections and to the staff at Royal Mail Heritage for their help. 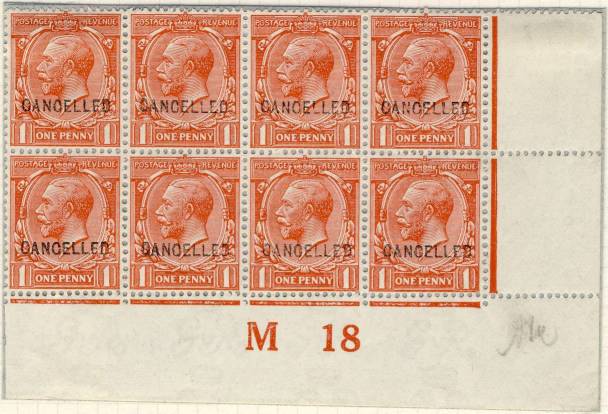 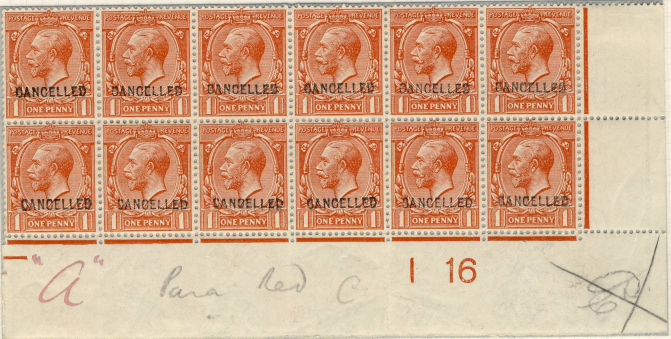