This sheet is attached to a letter in an Inland Revenue file in the National Archives, dated 17 May 1920 from G W Stonestreet (at Somerset House) addressed to Joynson’s (the paper makers) which reads ‘an attempt to print in solid colour on the highly surfaced paper you sent us’. However I am certain this sheet had nothing to do with the letter and has at some stage been attached in error.

What it does represent is Mr Patient’s idea in how continuously printed sideways delivery coils could be produced.

For this he took a sheet of Grover’s pre Great War advertising ‘stamps’ in landscape format showing a perforating machine, which had been produced during the time Grover’s works were in Wharf Road, East London and were exactly the same size as postage stamps. These he cut down to two panes of eight stamps across, fixed them to a backing sheet to leave a central margin and inked in his thoughts on how it could work. 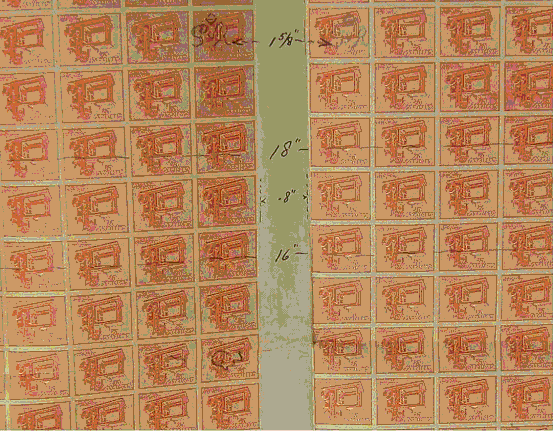 The 18” figure represents the total paper width allowing for a 1” margin on each side with a .8” central gutter, equal to the width of a normal upright definite stamp (standard stamp sizes are .8” wide and .95” high) - for sideways delivery these needed to be reversed to show a ‘height’ of .8” and ‘width’ of .95”. Eighteen inches was the same width as the paper used for end delivery rolls so would be suitable for either. Allowing for the 1” margin on each side this left a print width of 16”, including the central gutter. Two panes of 8 stamps x .95” equals 15.2”, which plus the .8” gutter makes up the 16” print width. The 1-5/8” was intended to be the distance between the watermarks to ensure the central margin was unwatermarked.

There is no date on the sheet but it is obviously from the early 1920s and Mr Patient’s first idea is almost exactly how the sideways delivery stamps were eventually produced.