The leaders for rolls containing the stamps of Edward VIII followed the same pattern as those used for George V. These were in the stamp colour with printing in black and all values, except the 2-1/2d, were continously printed. The printer's imprint 'Harrison & Sons/Limited/London and/High Wycombe.' in four lines, appears on the leader. Rolls were secured by pink tape and sealed with red sealing wax, stamped with a crown. Only 1/2d, 1d and 2-1/2d Edward VIII rolls were produced as there were sufficient stocks of George V rolls of other values in hand, to cover foreseeable requirements. 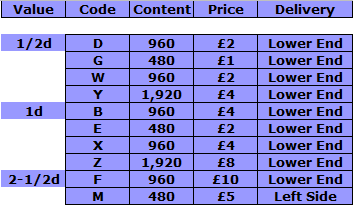 Edward VIII rolls were issued as needed and the following dates, taken from Post Office records, are stated to be the dates of issue of the various rolls: 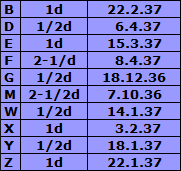 That Harrison's experienced considerable difficulties with the cylinders for the Edward VIII rolls is indicated by the following detail, which shows wastage was extremely high:

This also indicates that the figure quoted on warrants was before allowance for waste.

Edward VIII stamps continued to be used after those of George VI became available and in order to find out how many Edward VIII rolls were still held in Post Offices, the Post Office wrote to Postmasters during January 1938 asking them to report how many Edward VIII rolls were held and how long they would last, the return to be made by 14 January. On 24 January 1938 instructions were issued, by the Stores Department, to Postmasters to withdraw Edward VIII rolls from sale immediately. Rolls already in machines did not need to removed immediately, but allowed to remain until the next time the machines needed filling, but if this was later than 1 February, then the rolls had to be removed on that date and replaced. Unopened rolls were to be returned intact but part rolls were to be unwound and the stamps affixed to sheets of paper in rows of 10 across to make up, as far as possible, units of 120 stamps. Contents of any part rolls were not to be sold over the counter.

Both letters state that George VI rolls B, D, E, G, W, X, Y and Z could be identified by having GVI marked on the outer band; rolls F and M were not so marked and it would be necessary to distinguish them by examination of the stamps themselves. However it was pointed out that no F rolls had been issued since 8 September 1937 and no M rolls since 10 October, so only rolls received prior to those dates would need to be examined.

Despite the above statements that George VI F rolls were not overprinted 'GVI' these do exist with this overprint and have been seen in collections although these may have been issued subsequently.

As a result, the following complete rolls were returned to Stores (return undated):

These figures do not quite tie in with a report dated August 1950 showing production and usage of Edward VIII rolls, which give the following figures: 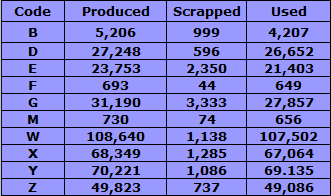 however it does give an indication of the relative scarcity of various Edward VIII leaders.